These web pages are dedicated to the study and practice of contemporary shamanism.

This is not a New Age site, nor does it concern itself with the pale resurrection of ancient traditions in the name of modern religious classicism.  Many people ask what shamanism is, but perhaps the shamanic is best defined, in modern culture, by what it is not.

Shamanism is not a religion. Shamanism, or the shamanic, is a way of being, a process through which one passes on the way to becoming a shaman.  Shamans are not interested in the theories of academics.  Shamans act, leaving the world of theories to those who need them to prop up their worldview.  Many feel called, but few are chosen, because the test of any shaman is to bring their knowledge back into this world and apply it.  Results count.

We honor the past, but we do not worship it... Shamanism never died - it merely evolved.

Shamanism is not about ritual, ceremony or hocus-pocus.  Shamans seek to know the unknowable, understand the totality of who and what they are, to jump into the abyss and return.  Shamans are not gurus or masters; they are seers, healers and travelers of unseen roads.

Contemporary shamans must function within their own social and cultural traditions. Anything less would dishonor the men and women who came before them, upon whose shoulders they stand today.  We honor the past, but we do not worship it.  Just as the old shamans were charged with adding to the knowledge of man, so are the new shamans equally charged.  Shamanism never died - it merely evolved.  This upsets some who wish to live purely in the past, but it is no matter.  Shamans will continue to be born, do their work and pass their knowledge on to the next generation, just as they have since the dawn of man.

Shamans act, leaving the world of theories to those who need them to prop up their worldview.

A great deal of information is contained in these web pages.  Most of it is couched in a conversational format; there are some stories and general information, as well.  The information here is not presented as a "how-to" course in becoming a shaman.  These words are presented only in the hope they will provide a glimpse into the struggle of those trying to understand things much larger than themselves.

Why do you call your practices Contemporary Shamanism?

My way of being a shaman is not typical in a traditional sense, yet at the base, it is very typical and very traditional.  I refer to what I do as contemporary shamanism, as opposed to the traditional methods of indigenous peoples currently practicing.  Those indigenous methods seem to be the approach a lot of people prefer, taking those indigenous practices and trying to reapply them to the current state of reality.  My peculiar brand of the practices, from what I can tell, is between six and seven hundred years old, passed down in a familial tradition.  It may be older than that, I don't know.  It has never seemed important to go any further back. 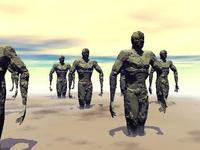 My view, and the view of the way I was taught, is that there is no need to reinvent the wheel over and over again.  In other words, not all headaches are caused by evil spirits, not all diseases are the fault of the person who has them, etc. The idea was that we had to function within an ever changing social and scientific structure of human experience.  To this end, it was important to be well educated, well read, and capable of understanding logical constructs.  On the other side of the coin, where the shamanic really enters in, it was important to make sure nature was kept close at hand, and the ability to deal with basic energies became the goal, as opposed to creating ever expanding metaphors within the human mind.

My practices are contemporary in that they take into account the current state of human knowledge and do away with many of the things from the past that will no longer apply, or were, frankly, just wrong. This often deeply offends the purists who insist in order to be a shaman you must honor all the dictums of the past and basically run around bareassed in the jungle all day.  Nice work, if you can get it.

I don't view my practices as antithetical to traditional shamanism, but merely a part of the natural evolution of human knowledge and understanding.  These practices still revolve around nature and natural energies, around practices and techniques which are very old, and yet, at the same time, they have been adjusted to new times and knowledge.

The idea was that we had to function within an ever changing social and scientific structure of human experience.  To this end, it was important to be well educated, well read, and capable of understanding logical constructs.  On the other side of the coin, where the shamanic really enters in, it was important to make sure nature was kept close at hand, and the ability to deal with basic energies became the goal, as opposed to creating ever expanding metaphors within the human mind.

There are a lot of traditions out there.  All human cultures have had a shamanic tradition at some point in their past, and some still in the present.  But, one shouldn't confuse that multitude of traditions and techniques as meaning the path is either easy or simple.  There are many who sincerely believe a weekend seminar or two makes them into shamans - it doesn't, not even in their dreams.  I certainly don't call myself a master.  What would I be a master at?  I could never figure that out.  Shamans are often referred to as the wounded healers.  I have found that to be quite accurate unfortunately.

Shamanism is a set of practices performed by a shaman in order to gain knowledge for healing, understanding, and helping in their communities. Shamans are both healers and seers.  Chief among their methods are the ecstatic trance, sometimes referred to as journeywork, and the manipulation of energy through knowledge gained by their practices.  In short, shamanism is about energy, all energy, and learning to see in ways which are new and radically different to most people.

People who practice shamanism are driven to it. No one in their right mind would "choose" to follow a shamanic path.  Many people are called, driven, or even feel hounded to understand the path and the practices.  Many people come to it after realizing they have essentially been on the path for years without understanding what was happening to them.  Shamans are not special, but they are unique.  Despite what you see from the new-agers, real shamans who have done their work and achieved some mastery of the skills required are few and far between.  The 'why' isn't the issue anymore to someone called to it - why becomes irrelevant.

Where does shamanism come from?

The word itself comes from the Tungis tribe in Siberia.  The word has been applied and misapplied since the 19th century to describe many indigenous practices.  Shamanism itself most likely was one of the earliest expressions of man's understanding of things larger than himself.  Almost all cultures have, or have had shamanic traditions.

Can anyone be a shaman?

No.  The title is not one which is taken; it is one that is given by the communities in which they serve.  Becoming a shaman means a great deal more than just being psychic or seeing auras.  The way is difficult at best, and not all people have the ability, talent or are capable of the sacrifices the path often demands.  Don't be discouraged, though.  If you feel driven to either the study or practice of shamanism, then you should pursue an understanding of that drive.