So, you want to be a shaman

Classes in Shamanism at Shamanscave

Let's start with the word 'shaman'.  Shaman is gender neutral - there are no shamen or shawomen, only shamans, big ones and little ones.  The word itself was taken from the Tungis tribe in Siberia by 19th century anthropologists.

"It is easy to go down into Hell; night and day, the gates of dark Death stand wide; but to climb back again, to retrace one's steps to the upper air -- there's the rub, the task." -- Virgil, 'Aeneid'

The name, which in Tungis means ghost talker, was then applied loosely by other scholars to any indigenous native religious tradition.  There is more than a small element of racism in that, but this is what was done.

Shamanism is the oldest form of human spirituality. In a very real sense, it is the grand daddy of them all.  Recent discoveries, of new caves in France put actual artwork representing shamanic themes back at thirty seven thousand years ago.  Tell this to a shaman and watch the flicker of a small smile play across their lips, because they know it is much, much older.  They have existed in every culture, every civilization, since the dawn of man.  They have traveled under many names, from the High Priests of Isis to the Delphic Oracles, from the Hebrew prophets to Nostradamus.  To the Celts they were the File (fee'lyee), the vision poets.  To the Scots, they were Tailbshear (tah'shar), the vision seers.  To the Welsh they were the Awenydd (ah-wen-ith), the inspired ones.  They are the walkers between worlds, the bridge between this reality and the unknown.  They are, in short, just plain nuts.

You will live, in some sense, in constant pain, alone; you will truly become the wounded healer.

Shamanism is not a religion - it is important to understand this, despite what new agers and some faux shamans try to create.  It is not a religion, though it is a religious practice.  Shamans are tied very intensely to the earth and to creation in general.  All shamans are unique; no two are alike even, though there are similarities.  The shaman of old was the man or woman living at the edge of the village in a mud hut, off to themselves.  They were usually shunned by the communities they served, until of course, they needed them.  Some things never change.

So how do people become shamans? 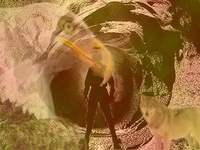 When people ask me seriously how they can become a shaman, I always respond with a simple question: "Why would you want to?"  Let me outline what is going to happen to you, if you ignite this spark.  You will have no friends; they will shun you because you scare them now; they will tell you that you're insane.  You will experience love, at its core - love so intense and so selfless; touching upon it makes you want to die.  But, you will never have anyone in your life again to share it with.  Your family will become strangers to you.  Everything you own will be taken away.  You will live, in some sense, in constant pain, alone; you will truly become the wounded healer.  People will treat you like a dime-store psychic.  Now, your spark is becoming a tiny flame and the bad stuff starts.  Visions you can't control; illnesses that are serious yet seem to have no cause or cure.  You will become depressed, a depression so deep and dark, you feel as though you are eating your own soul.

Now your tiny flame is growing into a small fire and the real trouble starts -- spatial lapses, missing time, time distortions and things that go bump in the night.  Your awareness begins to grow, but what is in that awareness provides no comfort.  New creatures will enter your world, not all of them are nice.  In fact, some of them will try to kill you, literally.  You will feel naked against the full force of ancient energies.  Something is driving you at this point, you no longer feel in control of anything.  Fear will seize you.  This isn't normal fear, but the kind of fear that steals your breath and stops your heart. People will become transparent wraiths to you.  When you see them, it will be in their totality.  You will feel their pain, anger and misery.  Not in terms of a casual observer - you will live it, in that instant.  This is unimaginably horrible.  But now you know, somewhere inside, a fire is raging.

Somehow, through all the pain, sweat, blood, misery and tears, you survive (most do not) to see beyond yourself and the world.  You're standing toe to toe with death - your own - and you suddenly slap it in the face and laugh . What appears next in your vision is one golden moment, one instant in a sea of time.  You will risk everything for that one chance to stare into the maw of eternity, to see, to know, because you are burning now with the fire from within.  You will leap into that chasm, not wanting to, but because you can do no less.  Now you are just a streak across that vastness, one small insignificant part of an immense whole.  In the end all you can say with that final desperate act is: "We mattered, we were here".  Perhaps you'll come back.  Perhaps you won't. But now you can carry the name . . . shaman.

So why be a shaman?

Shamans can be quite the life of the party - it's just a matter of why.  They choose their actions; they do not allow them to be chosen for them.  All of this comes down to the issue of why, why stalking, why dreaming, why intent and movement?  Shamans are using all these things to move their own energy to places that, frankly, are crazy.  But people in general can use the techniques to help them in their lives.  Shamans are both ignorant and amazingly wise.

A shaman is created in any two of the following three ways: they are born to it, they are trained in it as a tradition, or they are called to it at some point in their lives. Shamans act from a place that isn't quite the same as other people.  If a shaman loves you, he or she comes from a place where love is unselfish, unmotivated, they would love you only because you are you and for no other reason, no expectation, no sense of loss.