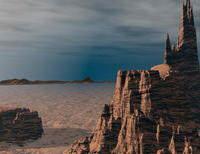 Let's take a look at anger and how it relates through our energy and connects us with the world.

Each emotion is unique in how it affects us.  Anger as an energy is important in the right context; it can support our will to survive, it can allow us to combat an aggressor in any situation.  The army doesn't teach you to yell, "Oh, excuse me," when you bayonet an enemy.  The problem that exists now for most people, however, is that in the modern Western world, we are left with few places or contexts within which real anger is appropriate, or even useful.  People are left with anger, feeling anger, expressing anger through other emotions, and being angry in ways that are self-defeating.

We like our pain, it's familiar, we know it, and we'll hold on to it if we don't force ourselves to let go.

We have to look at anger in each situation and ask some very important questions, starting with: what are we really angry with, is it appropriate, or is it a response to self pity and applied in ways which don't benefit us?  If you go back to the archetypical use for anger, you will find that not much in the modern world justifies the degree of anger most people deal with in their daily lives.  When it comes to self-anger, what are we really saying, that we deserved better treatment?  Self-pity, that we are justifiably angry because of loss, grief response, etc.?  That isn't to say that people don't become angry and that anger itself is something we should ignore, but from a shamanic point of view every emotion is used in some way to create more movement, to open our nature to larger worldviews, and if your anger doesn't serve that purpose, then it is misplaced.

Originally, anger was associated with survival, almost purely, but as humans became social animals, it started being used in social structures as well.  Anger has actual uses, but only archetypal anger, not personal anger in the sense of being angry with a person or set of circumstances.  Shamans seek to connect with these emotions on very pure levels where they connect to the larger intent of all human emotion.  Anger creates an adrenaline rush, it helps you leap out of the wild boar's way, or kill a wooly mammoth with more than your usual strength.  As humans became more socially aggressive animals and organized into groups, it also became a way to deal with other people invading your space.

The problem that exists now for most people, however, is that in the modern Western world, we are left with few places or contexts within which real anger is appropriate, or even useful.

Anger and fear are the opposites of each other, although they both have much the same effect on the body.  Anger can cancel out fear, and fear can cancel out anger.  I think it's always important to understand intrinsically how we are creating our anger and where it comes from.  Using anger in an outward motion, unconnected from personal issues, is the purview of the dark shaman, but that can remain a topic for later.

Emotion can be turned in on itself, and since we're talking about anger, we can use that as an example.  Anger usually manifests from a position of self-pity.  Not always, but very often that is the case when speaking of reflective anger.  Anger can be turned on itself to cancel out anger: two like emotions applied in more or less equal amounts can reach a neutral position of detachment.  In other words, get angry at the anger itself.  If you use anger aimed at the emotion of anger, you will often find that an epiphany of sorts results.  You are taking specific anger and smashing it into nonspecific anger, but still using the energy of anger.  This will, in effect, create a void emotionally, and through that void, you can see more clearly and with detachment.  The point at which they cancel each other out leaves an emotional void, an empty place devoid of emotional energy.  It may not last long, but it will usually exist long enough to allow you to move through it to see more clearly the real source of the original anger.  This can be done with virtually all the emotional energies, but is especially effective with anger and it's emotional opposite, fear.

How do you 'use' anger - specific anger, as a tool?

Originally, anger was associated with survival, almost purely, but as humans became social animals, it started being used in social structures as well.

Anger is a good one to use specifically for building, although that seems antithetical to the way we normally associate anger.  Anger can be used as a protection mechanism, it can be used to avoid confrontation, and it can be used in the face of other people's anger to deflect it away from yourself as an energy.  When someone becomes angry with you, for example, you can use anger - not a personalized anger, but the BIG anger - to deflect their anger, as well as your own.  You can be angry simply at their anger, totally disassociating it from any specific thing.  The opening that creates between two people is the same sort of void that you create in dealing with your own anger, and in that void, you can act with detachment in a way that allows you to move them away from the anger.  Or, if you're a butthead, you can use that opening to slice them open emotionally like a ripe melon meeting a machete.  The thing is, that opening not only creates a void, it creates a void which shows you where their anger connects in their energy to their patterns, just as it shows you how it connects in your own.  In that moment, you can use that knowledge destructively or constructively.  This is also a part of how shamans use stalking.  My favorite, back when I was known by different adjectives, was to use a short, simple declarative sentence to reduce the other person to tears and emotional rubble.  In other words, I could use the technique to find the spot where they became little children again, and then stick a hot jagged knife into it.  Aren't you glad I changed my ways?

Shamans seek to connect with these emotions on very pure levels where they connect to the larger intent of all human emotion.

Power is the most seductive force on the planet - but you see my point.

How do you USE anger?  I think of it as a gun.  It's dangerous and I'm afraid of it.

That's because you always personalize it - don't do that.  Disconnect from your personal anger and just use the raw energy of anger as an archetypal emotional energy.  Then you have that weapon - but use it wisely.

What are the dangers to watch for?

The danger is in ego.  The danger is in coming to enjoy a sense of power that you think you own, but which you do not.  If you feel that, if you recognize it in the way people react to you, stop and take a very, very hard look at yourself and the way you are using any of the techniques I've given out over the last ten years or so.  Any technique can backfire on you shamanically.  That's what I like about it, it's always a dance, it always keeps you looking at yourself and what you are doing.

Would people know what you're doing and react to it?

Depends on how practiced you are.  If you are very fluid and very detached, the normal average person will never have a clue.

Can you use the anger in healing?

Any technique can backfire on you shamanically.

Yes, I use anger very often with diseases.  But remember, not your personal anger, the big anger.  You don't want to get tied to it through your personal energy.  You can use anger against pain; in a way, pain is a form of anger coming from the physical body.  I know this is complicated because until you 'feel' it, it's very hard to connect with emotionally.  But as with all the practices, it's best to start small.