Once you're in the maw of the beast, very little will work except to just grab on with all four sets of nails and your teeth and ride the bastard out.

How do you combat depression?  It's the little things that count first.  I know, everyone wants the big stuff, the whole enchilada, let's save the universe, etc.

That always reminds me of the Chinese prayer I have been mindful of all these years: "Lord, please reform the world, starting with me."  Depression starts in small ways - you just don't notice it until it looms up and smacks you in the head. 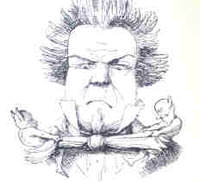 So, you unravel it by starting the same way.  First, the fundamental choice must be made to move out of the depression. That is the turning point.  Then, begin with small things, things you can start and finish and feel positive about.  It might be weeding the garden, making a new g-string, drawing up your own greeting card to send to someone.  Small things you can feel that you have accomplished, just for you.  These help anchor you in the world.  Sounds silly, but it works.  You will find it especially helpful to focus on giving of yourself to others in some capacity, in real ways.  Try it and see - if you dare. :)

Depression starts in small ways - you just don't notice it until it looms up and smacks you in the head.

You can get mad as hell at the depression; it will help show you where you are connecting.  The other thing with depression is to move it apart from yourself, cause it to go sit in a chair and really look at it.  Usually depression springs in the shamanic from two things, self-pity and the separation from the familiar, with nothing having replaced it, yet.  We always think the world, people, circumstances, owe us something and/or that life isn't fair.  But if we look in a detached way, we find that we are exactly where we have brought ourselves to be; the conflict between where we are and where we want to be creates depression.  We feel there is no space to move, but there is always space to move.  We just may not want to move in the ways we need to in order to create the outcomes we want, so we stay depressed.

Usually depression springs in the shamanic from two things, self-pity and the separation from the familiar, with nothing having replaced it, yet.

I always try to be sympathetic with people on this path who are suffering with depression.  The response I got from my mentor when I mentioned my depression when I was young man was his mimicking of a whiney person talking about being so depressed, and then I was reminded that I was as dumb as a post.  After that there were several colorful southern metaphors.  He was absolutely right - I hated that about him. :)  You are in conflict internally; blaming it on everything external only prolongs it.

How you heal from depression has a great deal to do with where it started, the patterns that exist in your energy, and your own personal make-up.  We're all unique individuals in the way we are made up, and we react differently to things; even things that may bother you once may not the next time.  We share commonalties in being human, but individually over the course of a lifetime we develop unique and individual patterns energetically.

Patterns from childhood, or even later in life, can be recapitulated to take from them their energetic sting.  This releases energy and breaks those patterns.  This is crucial for some types of depression, and can usually make the difference by itself in losing those heavy bouts of depression.  You have to start before you enter the depression, though.  Once you're in the maw of the beast, very little will work except to just grab on with all four sets of nails and your teeth and ride the bastard out.

You are in conflict internally; blaming it on everything external only prolongs it.

As far as the drugs are concerned, I advise people to stay off them.  What I have seen is that they tend to eat up your energy right at the midline and generally make a mess.  People are treating them as though they are a cure for depression - they aren't.  They were originally designed for people suffering severe depression and were not supposed to be used long term.  I was diagnosed with severe clinical depression.  Now I don't have it, which is medically impossible because it is considered incurable.