First of all, the second attention is a name, a word, but the concept of what we are talking about has traveled through many cultures and practices over time.

Different shamanic traditions have hailed it by various names.  This doesn't make referring to it as the "second attention" any less valid - it simply removes us from speaking in terms of one particular tradition or another.

Whether you choose to call it journeywork, underworld/upperworld travel, or whichever term, there remains a similarity in practice and experience.  I've chosen to approach it this way simply because it is easier for the western mind to gather in and begin to understand.

Once you have moved it to some point, you can go back there because your energetic body remembers it.

The second attention exists whether we choose to work with it or not, just as this attention exists. It is only the paucity of perceptual bias which keeps most people anchored here.  All human beings, at one time or another, have experienced the second attention, whether it is something simple like driving down a street and not being able to recall how we got to the end, or in dreaming, which is a powerful gate to the second attention.  So, everyone has had contact with it in their life, but most simply choose to ignore it or may not even notice it because of their attention being riveted in this reality.  We are born anchored in both attentions, but become fixated on this attention by enculturation.  We do this at first for survival.  You can't survive in a world where everyone has agreed reality is one way if you see it another way.  The problem with that is that we have split ourselves in order to exist here, ignoring the other parts of our energetic existence, the ones that disturb this reality.

The second attention exists whether we choose to work with it or not, just as this attention exists. It is only the paucity of perceptual bias which keeps most people anchored here.

The first attention is here, where you live and function with what you think of as normalcy.  The second attention is a shift towards the left side of your energy, where you can access the unknown with terrific clarity. It is as vast as this attention - only bigger.  The third attention is the combination of the previous two and the totality of yourself, which gives you access to dimensions normally not even considered when we think about it.  Moving through the first and second and coming back here is fine, moving into the third is the final act.

The second attention represents movement only because we are so firmly attached to our comfortable view of the world here.  But, like in the first attention, there are also degrees of the second attention.  It is represented in movement.  Think of it as an infinite grayscale.  When you move just slightly you begin to perceive differently and perceive other things of which you were not previously aware.  Move far enough, with enough energy, and you assemble a different reality altogether, although it isn't a movement of energy so much as a shift in perception, refocusing your attention. 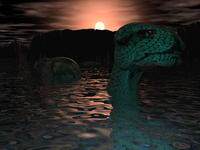 When shamans look into human beings we see them as energetic creatures.  If you look deep enough, you will see a point where all of a person's perceptions are being brought to bear, all their lines run through it. This point is what must move.  We refer to it as the point of perception, point of awareness, or, the assemblage point.  It is the point in our energy where we assemble reality.

It's really pretty simple as a concept.  The assemblage point is the point of perceptual awareness, so literally nothing you can perceive is outside of that point.  The point itself, however, can be moved and these shifts allow you to perceive new things.  You can use any of the other energy points in the human sphere to perceive these things with, but the energetic lines which allow you to see them must first run through the assemblage point.

We are nothing if not unrealized potential in this regard.

If you shine a flashlight in a totally darkened room on a very small spot you will see what is in that spot of illumination and nothing else.  If you move the spot just slightly, you suddenly are able to see new things that weren't in the light before.  This is how the assemblage point works, in a sense.  You also would be able to remember what was in the direction from which you had moved the spot of light and go back to it if you wanted to see a particular thing again.  This is also true of the assemblage point.  Once you have moved it to some point, you can go back there because your energetic body remembers it.

The second attention is where shamans have been traveling for ages. Everything is there, and nothing is there.  It functions outside our perception of time, but is timeless.  We can touch upon all of it for both knowledge and experience.  There are problems with the second attention as well as in using what you find there, in this attention.  As you progress, you will be less here and more there.  It seems to be a natural evolution.  Keep in mind that this represents the totality of what you are as a human being in terms of your energy.  We are nothing if not unrealized potential in this regard.

Historically, shamans have and still do approach the second attention through ecstatic trance.  Ecstatic trance has been the traditional method employed by shamans to access the second attention.  They reach this state by drumming, dancing, whirling, drugs or chanting.  The problem with traditional methods of ecstatic trance as a means to the second attention is that it is not very reliable upon return.  It can take, and often does take, a lifetime to master the techniques to a degree that allow a person to glean useful information from their trance states.  There are other methods which aren't as dangerous, but are more confusing, because they bring you into direct shifts of the assemblage point and this takes some getting used to - techniques like polishing rocks, water work, earthwork, and dreaming exercises.  The assemblage point can also be moved directly by someone who has enough personal energy and knowledge to accomplish it, but that's another story.  So, what shamans want to do is to remain fluid enough in their energy to learn to move that point to other places in their energy - to assemble different things, and those things are myriad.

This point in our energy which governs our perception of our reality can be moved to allow us to perceive not only differently, but new things alien to our current reality. Shamans, born or native shamans anyway, are those people whose points of assembly never gel into place.  They seem to move from a young age.  If we shift that perceptual ball far enough we can disappear from the world because we will have assembled a new reality in our perception.  That is the far end of the second attention though, so don't panic. :)  We do this because we need knowledge, to see, to ultimately be free.

Free from death itself. But let's be honest - as a goal it is a wonderful thing, but as a practical matter of achievement it isn't likely very many people will get there.